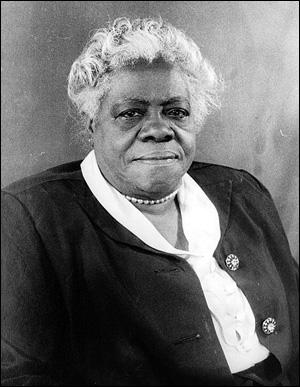 Extraordinary educator and political leader Mary McLeod Bethune (1875-1955) founded NCNW in 1935 as an “organization of organizations” to represent national and international concerns of Black women. NCNW fought for jobs, the right to vote and anti-lynching legislation. It gave Black women the opportunity to realize their goals for social justice and human rights through united, constructive action. The legendary Dr. Dorothy Irene Height led NCNW for decades, securing its legacy of enlightened leadership and influence.

Mary McLeod Bethune, NCNW Founder and 1st National President, Advisor of Minority Affairs to President Franklin Delano Roosevelt, said that she could not rest to see the unharnessed power among our women, so she called upon 28 national women leaders who responded to her call. She pointed out that what was needed was not another organization, but one that would bring organizations together. Mary Church Terrell proposed forming a “Council.” Thus, Mrs. Bethune founded the National Council of Negro Women as such – “a national organization of national organizations” at the 137th Street Branch, YWCA, New York City, December 5, 1935.

Mrs. Bethune envisioned NCNW functioning as a clearinghouse, facilitating networking and coalition-building, and advocating the use of collective power on issues affecting women, their families and communities. In 1937 in New York, the first community-based section was organized.

Through the years there has been growing appreciation and recognition of the value of a unified voice in the corridors of power. This has been expressed in different ways. What happens on Capitol Hill has direct bearing on the quality-of-life issues core to our community’s survival and well-being, and our voices must continue to be heard loudly.

When Bethune decided to step down as president of NCNW in 1949, she helped ensure that Dr. Dorothy Ferebee, NCNW 2nd National President, her personal physician and NCNW’s national treasurer, would be elected the next NCNW president. Not surprisingly, Ferebee put increased emphasis on healthcare education. Under her leadership, NCNW also focused on ending discrimination against blacks and women in the military, housing, employment, and voting. She continued fundraising efforts and participated in various meetings of national and international organizations. She was a member of the executive board of the White House’s Children and Youth Council and the United Nations Children’s Fund (UNICEF).

In 1951, Ferebee led NCNW in hosting a reception for the wife of the Vice-President at the Shoreham Hotel in Washington, D.C. This event was important because it gathered approximately 500 women from diverse backgrounds. As a result of Ferebee’s determination and leadership, it also was the first time that a major Washington, D.C. hotel had rented its main ballroom to an African American group. During her presidency, Ferebee also issued a “Nine Point Program” which called attention to the need to achieve “basic civil rights through education and legislation.” She worked hard to advance NCNW’s agenda while maintaining a full-time job at Howard University and dealing with limited funds and staff.

In November 1953, the Council elected Vivian Carter Mason, NCNW 3rd National President as president. A graduate of the University of Chicago, Mason had been the first black female administrator in New York City’s Department of Welfare. She was president of the Norfolk NCNW chapter and vice-president of the national organization under Dr. Ferebee. Mason’s administrative skills were beneficial in helping to better organize NCNW headquarters and connect local chapters to the national office. Under her leadership, NCNW members participated in numerous meetings and conferences held by such groups as the U.N. Commission on the Status of Women, the American Association for the United Nations, the International Council of Women of the World, and the National Advisory Committee on Health.

Mason served as president when NCNW marked its 20th anniversary in 1955. At a celebration in February, Mary McLeod Bethune praised the council members by saying, “I am very grateful to you, my daughters. I have been the dreamer. But, oh, how wonderfully you have interpreted my dreams.”1 A few months later, Bethune died of a heart attack at her Daytona Beach home on May 18 at age 79. During her lifetime, Bethune witnessed the tremendous growth of the organization she founded. Over its first 20 years, NCNW helped African American women break down barriers that often isolated them from mainstream America. Through perseverance, the council helped make it acceptable for black women to be a part of national and international affairs. Through increased interaction with white female organizations, NCNW tried to unite all women as equals and present a more accurate image of American black women to the world.

In 1957, Dorothy Irene Height, NCNW 4th National President/Chair, who had served for 20 years in various appointed positions with NCNW, became its fourth president. Height had the daunting task of leading NCNW during the early 1960s, a turbulent period of increased racial violence in the South as the Civil Rights Movement expanded. In 1963, she had offered NCNW headquarters as a meeting place for national organizations and individuals taking part in the March on Washington on August 28. During this period, civil rights advocates were being arrested in states such as Mississippi, Alabama, and Georgia. As tensions mounted, Height and NCNW launched a plan that called for racially mixed groups of women to visit rural communities in Mississippi each week during the summer of 1964 to foster better communication among the races and encourage voter registration among blacks. This highly successful project was known as “Wednesdays in Mississippi.”

To address the problem of financial support, Height made it a priority to revise the Articles of Incorporation and make other changes that resulted in the U.S. Internal Revenue Service granting tax-exempt status to NCNW in 1966.